Congress for The New Urbanism 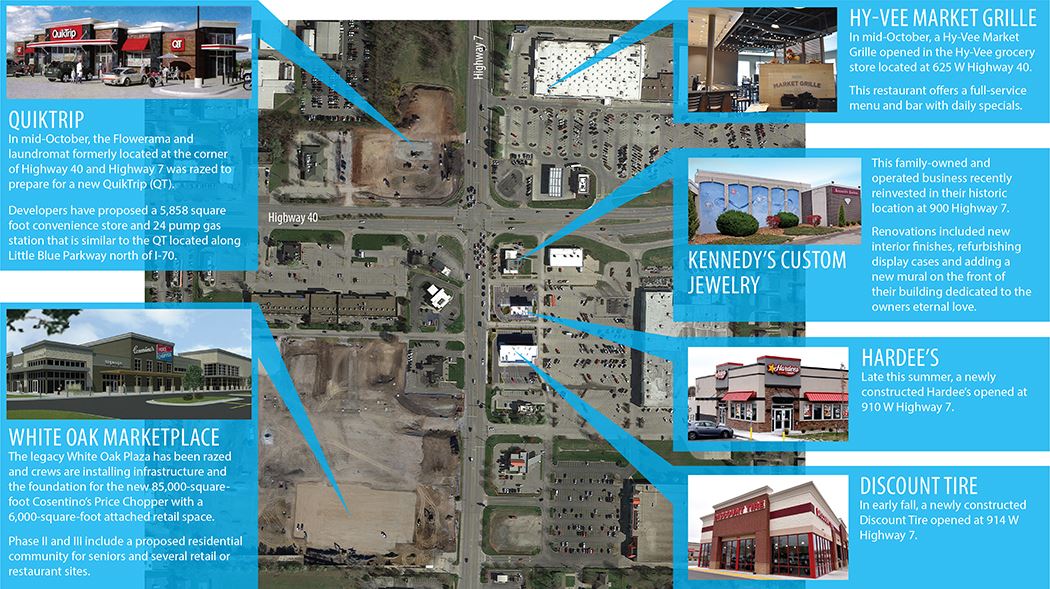 Blue Springs, MO is a residential suburb of Kansas City. Its population is approximately 55 thousand and it covers a land area of over 22 square miles. Over 80 percent of its land use is residential, with 15 percent dedicated to commercial uses and the remainder designated for industrial uses. Blue Spring's principal transportation corridors are two highways and an interstate. Blue Springs, prompted by a Livable Streets resolution passed in 2011 and a commitment to the national Let's Move campaign in that same year, was ready to embrace other forms of mobility.

The intersection of State Highway 7 and US Highway 40 was chosen for study. Both roads began as commuter thoroughfares but had evolved into commercial corridors that serve local residents.

Congress for the New Urbanism (CNU) facilitators visited the study location prior to the public workshop. CNU found that the intersection was designed to move vehicles with little attention given to walking, biking and transit. Throughout both corridors facilities for bicyclists and pedestrians were either disjointed or entirely absent.

A public workshop on the topic of Designing Walkable Urban Thoroughfares was held from 9 am to 2 pm. The workshop was attended by approximately 40 people; stakeholders included City of Blue Springs staff, local residents, Missouri DOT staff and other transportation professionals from the Kansas City region. The morning was spent discussing topics such as Complete Street, Context Sensitive Solutions and various design possibilities for reconfiguring the intersection of highways 7 and 40. After lunch participants worked in small teams to develop recommendations for the intersection. CNU's visit concluded with a work session attended by Blue Springs and Missouri DOT staff.

Mid-America Regional Council is working on a corridor plan for 22 miles of U.S. Route 40, which was informed by the workshop's recommendations.

The City is revising its comprehensive plan and the unified development code.